“When I first heard about Christian Apologetics,” says Darryl Record, SGWM missionary in Cambodia, “my initial reaction was, ‘I’m not going to apologize for being a Christian!’ I had no idea what it meant.” I doubt that Darryl is alone in this experience, as we’ve been trained to view the word “apology” in a very specific light. But Darryl soon learned the true definition of apologetics, and he was hooked on the concept. Bruce Shelley, in his book Church History in Plain Language, says, “the word comes from Greek and means defense, such as a lawyer gives at a trial.” Darryl decided to commit the focus of his life to this defense of the faith, a journey that took him from not even knowing what the word meant to eventually receiving his MA in Christian Apologetics from Biola University. 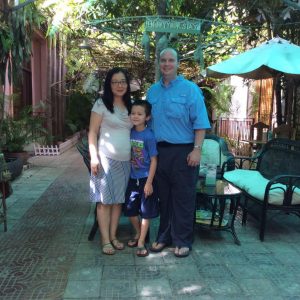 The Record Family: Darryl and Kayo with their son Benjamin

But Darryl wasn’t content to remain in the states for his apologetics work, where information and resources already abound. Before receiving his degree from Biola, he had a breakthrough in his relationship with God in which he simply surrendered his all to Christ. He promised not to say “No” to whatever God may ask Him to do. So, God said, in effect, “Go to Cambodia.” After a short-term stint, Darryl returned home to finish his education, during which time he met his future wife Kayo, a first-generation Christian from Japan, who also felt a calling to missions. They married in 2004, went out back out on the field in 2007, and haven’t looked back since putting their hand to the plow.

Darryl noticed that while there were plenty of gospel resources in Cambodia, there was not much material regarding creationism or evidence for the truth of the Bible. But surely the Cambodian people struggled with the same existential questions that had plagued Darryl earlier in his own life, right? For Darryl personally, he says that at one point in his life there was a “gradual flow of evolution and Biblical criticism that was seeping into my worldview from my public school teachers and later university professors. Little by little my faith was eroded.” These problems are not exclusive to western culture. According to Darryl, the Theravada Buddhists of Cambodia “believe that everything came into existence by water, wind, earth, fire, time, and chance.” And evolution is pushed hard in schools there, just as it is in the U.S. So Darryl’s heart is to not only present the Gospel, but also to gently and respectfully help remove intellectual obstacles in the hearts of the unbelievers there. 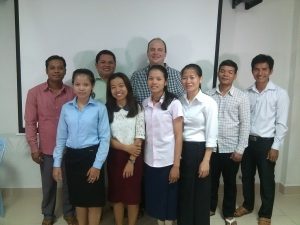 Typically when westerners think of apologetics, we conjure up images of men in suites with lots of letters attached to their names trying to win an argument. But Darryl knows that apologetics is not about winning debates. Especially in the Asian culture he lives in, the focus needs to be on relationship and community, so that is how he approaches his broad range of work in his field in Cambodia. Primarily, he teaches Christian apologetics at a Bible school there, but he has also authored and co-authored two bilingual Christian apologetics books, written scripts for Christian radio programs, and is currently working on an exciting project of producing short evangelistic/apologetics videos in Cambodian. In this wide array of activity, he has mastered how to defend the faith with the gentleness of Christ in the way the Cambodian culture receives it best. 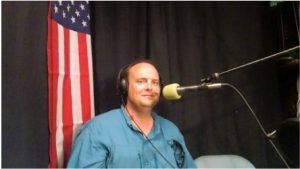 Darryl talking apologetics on the radio

Darryl clearly has his hands full, but he also has a laser-like focus. When asked to sum up his ministry in one sentence, he simply quotes Ephesians 4:12 – “for the equipping of the saints for the work of the ministry, for the edifying of the body of Christ.” Or, when put in his own terms, “We seek to equip local Christians to reach their own families and neighbors with confidence in the truth of God’s Word.” This is a vision that fits right in with SGWM’s: training nationals to reach their own people with the gospel in ways a westerner never could. And once he’s equipped nationals with the proper tools, they will be ready to, like Darryl, “give an answer to everyone who asks you to give a reason for the hope that you have…. with gentleness and respect.” (1 Peter 3:15)