(Editor’s Note: Tim Rich (deacon and leader of Missionary Care Teams at Calvary Chapel Saving Grace) and his wife Mary Ann helped man SGWM’s table at the Calvary Chapel 2018 Global Missions Conference. Below is Tim’s assessment of SGWM’s reach from his experience at the conference.)

Picture yourself sitting at the SGWM table at the four-day Calvary Chapel Global Missions Conference in Murrieta this past week when a small group of young women approach.

One says to another, “Oh look, there’s the SGWM table.” Another says, “There’s your picture and prayer card” among a dozen others in a display in front of you. Suddenly, you realize you are meeting one of “your” missionaries and looking into the face of what Saving Grace World Missions has become—a sending organization for missionaries not just from Calvary Chapel Saving Grace  but from churches—some in faraway places—which don’t have the wherewithal to provide administrative and other support for missionaries headed to the field. 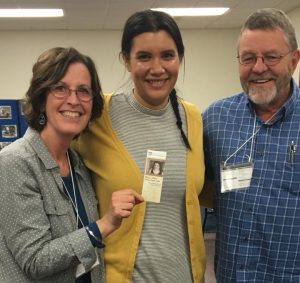 In the past few years, SGWM has attracted a significant number of Christians from around the country and beyond who are being led by the Lord to the mission field. They have the desire to serve and the leading of God to go but no practical way to make it happen. Enter SGWM which has been established to assist them in receiving donor contributions and providing tax receipts for those donors, payroll, budgeting, e-mailable newsletters, updates and prayer requests, medical benefits, missionary specific tax services, pastoral support and counseling, and a myriad of other functions.

Originally established as the missionary arm of Calvary Chapel Saving Grace, SGWM today serves three times as many missionaries and missionary families from other churches than from CCSG. Some are the product of CCSG outreaches, most notably the pastor-training schools of ministry this church established in South Asia.  Some are from other Calvary Chapels which need assistance in answering the call of reaching the world with the gospel of Jesus Christ (Mathew 28:19-20).

It was apparent at the four-day missions conference that SGWM is gaining a reputation as a first-class sending organization. The conference attracts missionaries and mission-minded Christians from around the world. Many who visited the SGWM table had already heard of the good work SGWM is doing and were interested in hearing more. But one such group of visitors—those depicted in the second paragraph of this article—already knew the benefits of this organization. Rebecca Alaniz, who came to SGWM from another Calvary Chapel, visited the table with her friends and had nothing but high praise for the support she receives from SGWM staff, most whom she mentioned by name. Rebecca is currently home raising support to return to Zagreb, Croatia, where she ministers to children in the Roma (gypsy) community. More information about her and others serving in the world is available here at SGWM.com.