Just a quick look-over of Bond and Heather Gaona’s travel schedule is an exhausting experience. If you’ve ever travelled internationally, you know that even one long international flight can be tiring. Jet lag alone tends to throw off your body’s schedule for a few days. I remember my own Missions Pastor telling me about the sensation of feeling so tired that it hurts; after returning from my last trip to South Asia with him, I vividly understood what he was talking about. 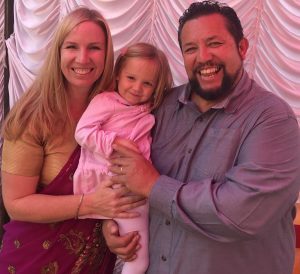 Pastor Bond Gaona, his wife Heather, and their two-year-old daughter Breanna, however, are pros at this by now. Breanna has been doing this her whole life, and her parents say she’s a better traveler than they are! This was abundantly evident to me a few weeks ago as I sat across from all three of them at a taco restaurant; they had just returned from Nepal barely 24 hours earlier and I knew they were exhausted, but they handled themselves with ease. Almost every time they land across the ocean or in the States, they hit the ground running. The Gaona family has responded to a specific call from Christ on their life that doesn’t really allow them to plant firm roots anywhere. As missionaries for SGWM, they split their time each year between three different continents. They’ll leave their home base here in the United States to spend a few months in South Asia and then head to Nepal, or to spend a good chunk of time in African countries like Uganda, and then return to the United States for a couple of months, only to go out on the field all over again. It’s a whirlwind experience that they wouldn’t trade for anything. In 2008, God stirred their hearts to start reaching the nations with the Gospel in a greater capacity. So now, they submit to a travel schedule that is, to most people, a bit dizzying. The Gaonas never seem to settle down, because for them, home is wherever God is using them to advance His kingdom.

“There was no specific goal in mind when we started,” Pastor Bond says. “We just didn’t like the idea of staying in one place forever.” In those early days, as the Lord was beginning to give Bond a broader vision for the nations, his wife helped ground his outlook in the Bible by reminding him that this was exactly what Paul did. The great Apostle to the Gentiles has become somewhat of a model for their own missionary work.

The Gaona’s game plan is to go to the unreached and preach the Gospel to them, disciple those who come to Christ, and raise up leadership among that group to take over the work there for them. Then, they do their best to return there every year or so to see how they’re doing and help with any of their practical and spiritual needs. Sound familiar? It looks like a modern day layout for exactly what Paul did all through the book of Acts. While many missionaries are called to go out and plant roots in a new country to establish churches and disciple people, the Gaonas feel called to have a further reach. Raising up nationals to continue the works they begin allows them more time and freedom to reach other unreached people groups. Another upside, says Heather, is that “the people don’t become as dependent on you; they’re forced to step up and take leadership.” And this leads to fruit that lasts and multiplies itself in the areas the Gaonas evangelize in.

But this lifestyle has not come without some personal cost to the Gaonas; the call of Christ is never easy. There are, of course, the cultural issues that all missionaries face. It takes a lot of work to learn a culture well enough to overcome issues of language and, even amongst those who speak your own language, the interpretation of what you are trying to say (Pastor Bond calls this the “box of confusion” phenomenon). And the Gaonas are juggling this issue in multiple countries!

Another difficulty fairly specific to Bond and Heather is that they aren’t able to create a real “home” for themselves anywhere. This can be particularly hard on Heather as a mom and wife. But Heather is intentional about doing the best with what she is given, and understands that even with this unique issue, other missionaries who plant themselves in a specific country face problems that she doesn’t have to. The Gaonas do a fantastic job with taking things in stride and with a proper perspective. 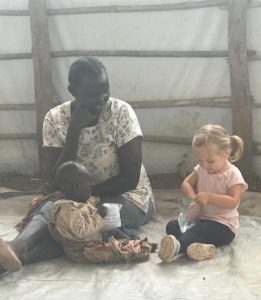 Bond and Heather have greatly valued the relationship they have with Saving Grace World Missions. The number one thing they appreciate about their sending organization is pastoral care and guidance. Bond cites Proverbs 15:22, stating that “There’s just more wisdom and counsel available to us with different pastors and leaders on the board.” They have a team to run big decisions and vision by. Heather has really appreciated guidance and counsel from SGWM pastoral leadership, particularly when both her parents were facing health issues and eventually passed away. She was advised to give herself time to stay home and grieve her loss, and  received counsel through that difficult time. The compassion and freedom she was granted during that season was a huge encouragement to her that she’ll always hold onto.

Life on the field (or, for the Gaonas, on multiple fields) is never a breeze. But, as Pastor Bond says, “When you’re called, nothing seems too hard to handle. It’s when you’re not called that you start running into issues that are beyond your grasp.” The Gaonas know that they are called to what they are doing, and their unwavering faith in Christ through it is strong evidence to that fact.